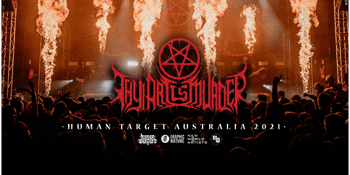 Thy Art Is Murder - Melbourne

170 Russell (Melbourne, VIC)
Friday, 8 October 2021 7:00 pm
254 days away
18 Plus
Hardcore
Send this event to
Australia’s masters of brutality Thy Art Is Murder have announced the Human Target Australian Tour, set to cause carnage across the country in October 2021. Their first headline run since the release of their earth-scorching fifth record of the same name, The Human Target Tour will be a night to remember as Thy Art Is Murder unveil their most ambitious Australian production to date with help from supports Dying Fetus, Fit For An Autopsy, Enterprise Earth and Aversions Crown.

Since the release of Human Target, Thy Art Is Murder have been on tour non-stop, leaving a trail of sold out shows in their wake. Between bouts of crisscrossing the Northern Hemisphere, the band briefly returned home for a stint on Good Things festival before heading back to Europe.

Thy Art Is Murder’s last Australian tour sold out over a month in advance (!) so don’t sleep tickets or you’ll be sorry.